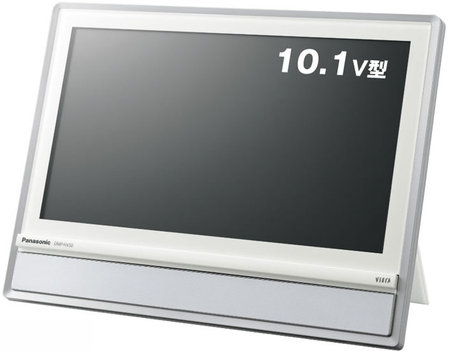 Panasonic is out with three new terrestrial digital televisions for the Japanese market. The silver colored DMP-HV50 features a 10.1-inch LCD priced at 50,000 Yen which is $548 (USD). According to the translation, which is always very vague, it doesn’t seem to come with a battery. Go figure. The second model is the DMP-HV100 that’s priced at about 65,000 Yen which is about $712 (USD). A slightly higher ended model the DMP-HV200, comes with a 10.1-inch VIERA LCD and built in BD player with a built in battery. This one is going for about 90,000 Yen which is roughly about $986 (USD). These portable TVs also feature a Digital Photo Frame mode for viewing images when you’re not watching the tube. For this a memory card slot and USB port have been provisioned as well. Another feature called DIGA can be used to record live TV onto your memory card for later playback. DLNA is also built-in. The HV-100 and HV200 will be out sometime in April while the lower end HV50 should hit the market by June 25th.
[AV Watch]