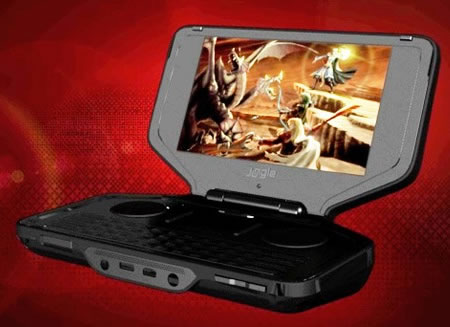 Panasonic says welcome to The Jungle, a new age in portable console gaming

So Panasonic is also into the portable gaming console market now with their system that’s named ‘The Jungle’. I have no idea why they’ve called it that if you do, please let us in on it. It looks like a little netbook complete with a full QWERTY keyboard and what looks like separate navigation controls above it, possibly touch sensitive. There’s no word on the size or display resolution of the screen but Engadget says – super high-resolution display. It’s got a 3.5mm earphone jack, mini HDMI port and a micro USB port and is running on a custom Linux OS. There’s also word that Panasonic will launch a Battlestar Galactica title for the device, and a web show called Online Underground. I’ll admit that sounds a tad exciting. ‘The Jungle’ console has also show up on an MTV’s on Rob Dyrdek’s Fantasy Factory show.