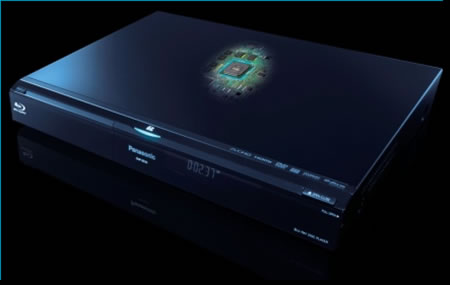 Panasonic’s DMP-BD30 is the first Blu-ray player to be introduced with Final Standard Profile. Another unique feature is the inclusion of SD Memory Card slot for playback of High Definition content recorded in the AVCHD format. The SD slot also allows for viewing of digital still images recorded to an SD Memory Card. Final Standard Profile is an advanced function that features new functions such as Picture-in-Picture and Audio Mixing. The specs include Deep Color Compatibility, HDMI 1.3B and 1080 / 24p playback.

The Panasonic DMP-DB30 features the EZ-Sync HDAVI Control that allows you to operate your Panasonic home theater system with one remote. With one touch of the EZ-Sync button, all the components turn on, the correct TV input is chosen, the TV’s built-in speakers are muted and the home theater starts playback. The player is set to retail at $500, but the release date is not known.
Source