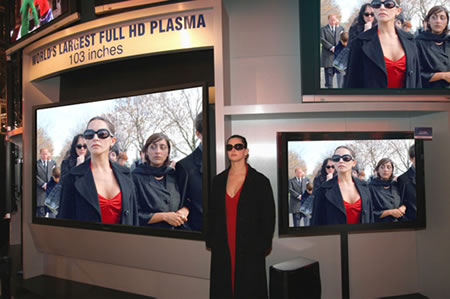 This Christmas Panasonic will be releasing the much anticipated 103 inch Plasma screen. It will deliver more than two million pixels (1,920 x 1,080) of performance. The 103-inch 1080p plasma panel, equivalent to four 50-inch panels in size, features consistent and uniform discharge, delivering the same accurate images from the center to every corner of the screen. It will have a contrast ratio of 3000:1 and a 3.8″ pixel pitch. Just hook up this baby with the Playstation 3 which hopefully goes on sale by November for the ultimate gaming experience. Panasonic has not released the pricing yet but it will obviously cost a bomb as the LG 71 inch Plasma costs around $35k.