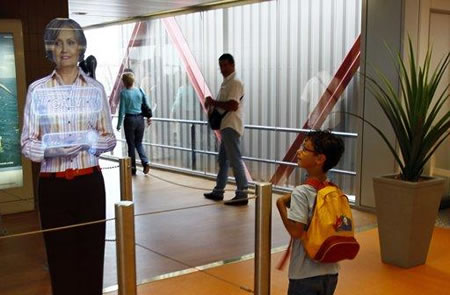 The recent financial crisis has affected US and EU greatly, and as a result, organizations are bound to come up with innovative ways of cost-cutting. Orly Airport in Paris is replacing human boarding agents with virtual ones and is probably saving up on salaries and other perquisites. These life-like video images will greet passengers and direct them to their boarding gate. The images would appear once the ‘summon’ button is pressed. Obviously passengers were caught by surprise and the most common response from kids was the itch to touch and speak with these images. A while ago something similar was done by Manchester Airport that had deployed Hologram staff to guide passengers about the restriction on carrying liquids on the flight. Looks like this trend is catching up and probably the next thing would machines serving us food in airplanes.