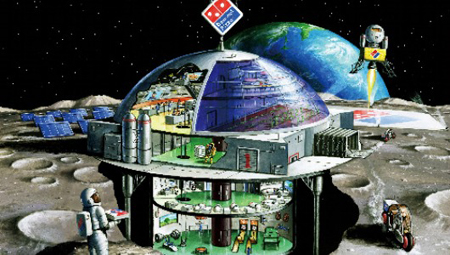 Order your Domino’s Pizza on the moon

I wonder what earth’s 30-minutes would be on Mars. However, it does take a while to ride with a steaming hot pizza on a surface that doesn’t have any trace of gravity. That’s pretty much what we see with the becoming of the Domino’s Pizza joint on the moon. Well, this will mean that we will be seeing 15 rocket launches and 14 billion dollars to make the whole mission possible. This joint will also have a pool table and darts, two games that require gravity to keep people from being hurt. The messaging that this entire campaign will put across is that Domino’s does deliver to far off places. Well, so much for getting a message across.

What we do not know is whether this whole setup is some weird leer for some space creatures who may find the celestial aroma too tempting after all the vacuum to inhale.
MNN