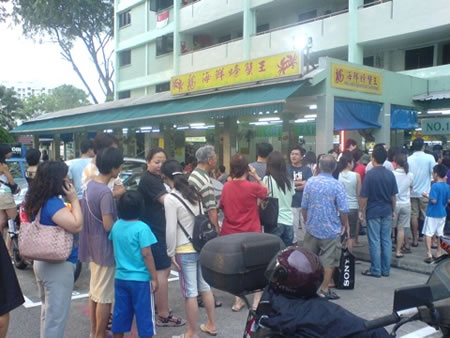 Order a burger at McDonalds using your mobile phone 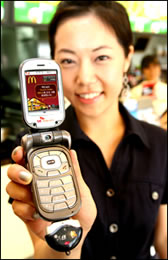 McDonald’s and SK Telecom Korea on Wednesday showed a new ordering system using mobile phones and infra-red sensors which let customers make orders from their table and sends them a phone message when the meal is ready. This is good news for those who hate to wait in a queue especially with kids around to get a burger and fries. The “Touch Order” menu is the first in the world to utilize the radio-frequency identification (RFID) technology in a self-ordering system at a restaurant, SK Telecom said. First, customers have to download a special program onto their handsets using SK Telecom’s Nate mobile Internet service. Most phones manufactured after June 2005 can handle the operation, the firm said. At each table, there are an RFID reader and a menu that has built-in RFID chips. Customers plug the reader into their mobile phones, and point them at the item on the menu that they wish to eat or drink. The bill is charged through the mobile phone. When the meal is ready, the system sends a short message to the phone so the customer can pick up the ready tray at a designated counter.

The Touch Order was unveiled at McDonald’s Shinchon branch in western Seoul near Yonsei University. SK Telecom said that it hopes to expand it to a few more stores by December, and hopefully to other restaurant chains next year. But McDonald’s remained more guarded about the new technology. The RFID is an automatic identification method, widely used in warehouses and other logistics facilities. It is also increasingly used in electronic passports so they can store the travel history of holders. The bus and subway payment system in Seoul is a kind of RFID system as well.