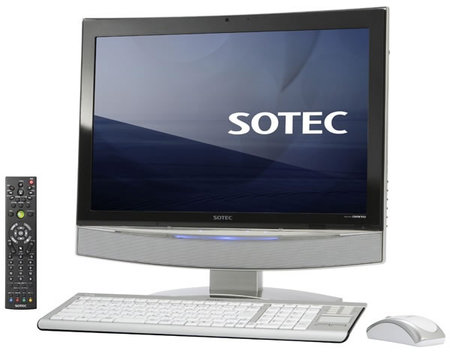 Onkyo Japan has announced the E702A9 Sotec, the Media center PC will be powered by Intel Core 2 Duo E7400 processor, 2 gigs of RAM and a 500 GB hard drive. It will come with a 4X Blu-Ray drive, TV tuner and a 21.5 inch LCD supporting a resolution of 1920 x 1080 pixels. Two programs can be recorded simultaneously one on the hard drive and the other on a optical drive. The lower body has Onkyo’s 8W x 2ch speakers, port connectors and an iPod dock. Other features include 1.3 Megapixel webcam, wireless keyboard / mouse and a fully functional remote control. Apart from the Onkyo brand name it has nothing worthwhile for the price of 179,000 Yen ($ 1900).
(One more image after the jump)