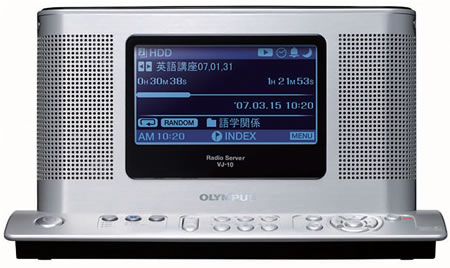 Shifting focus from Digital cameras, Olympus Japan has introduced the VJ-10, a radio which looks more like a PMP. Olympus has squezzed in a mammoth 37GB hard drive into the VJ-10 and will be selling them as radio servers, as the 37GB hard drive can record upto 2500 hours of radio programming. Dont expect Sirus, XM or Worldspace compatibility as the unit has a plain AM / FM tuner. Recording is done in WMA format (32 – 128 kbps), the unit can be preprogrammed for 20 recordings which are saved in different folders depending on the frequencies. The unit has a 3.9 inch (128 x 400) monochrome STN display, USB 2.0, amplifier and stereo speakers which sound much better thanks to SRS and WOW XT. The VJ-10 can be used as a standalone hard drive too.