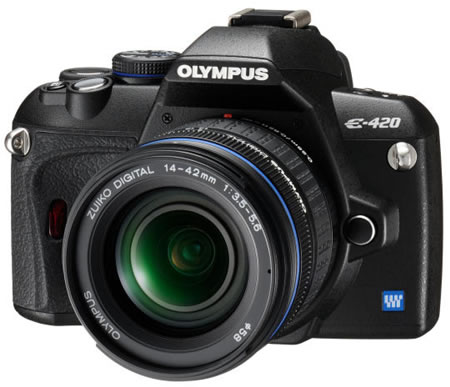 Olympus E-420 is an update to the E-410 bottom-of-the-line dSLR, and features a built-in wireless flash controller. Although Olympus is harping about E-420’s size, the truth of the matter is that it’s only 0.01 to 0.02 smaller in any dimension than its predecessor, and in fact weighs a couple of ounces more. The LCD size however has moved up from 2.5 inches to 2.7 and the grip a bit larger as well. Specs also include Shadow Adjustment Technology and improved white-balance algorithms. The continuous-shooting speed goes up from three frames per second to 3.5fps