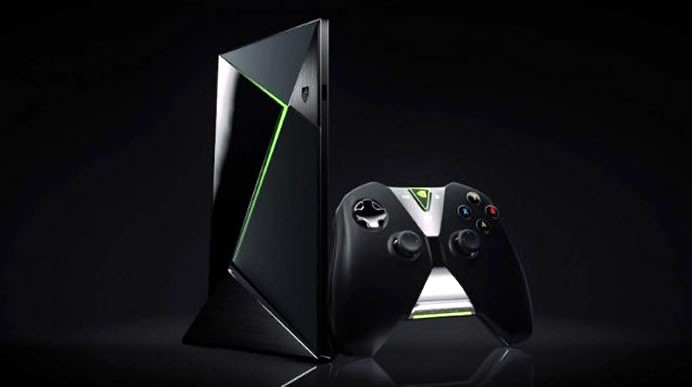 The console wars are heating up and the latest entrant into the fray is that Tegra X1 toting, 4K video supporting, Android running, slick as they come, all new Nvidia Shield. Although it’s slated for a May release, the latest iteration of Nvidia’s gaming console is making waves in the industry and the company is teasing gamers with its innovative concept and capabilities.

One would imagine that it wouldn’t really stand up to the PS4 and Xbox One systems as they are but I think it has potential to be a quite an exciting venture. Fitted with 3GB of RAM and 16 gigs of on board storage with the option to expand via microSD cards or using drives of the USB 3.0 variety, the latest Shield is no longer a portable device in the “gaming” sense, that comes with its own display, this is a stand alone, table top, console-style device that hooks up to your HD or 4K enabled big screen. A single controller will also be available with the device when it hits the shelves as well as a remote with voice control capabilities. The older controller will work just as well and a Shield tablet could also be used in its stead.

While it’s similar to what you can get off of your Xbox or PS3, the difference here is that you could also play your Android based games via the system which supports Open Source gaming. Connections work via Bluetooth 4.0 to your handset or Shield Tablet, or you can stream games from Grid which is Nvidia’s cloud-based gaming service. There aren’t too many titles out just yet, but it’s getting there. We can most assuredly expect more, a little closer to launch time. Games can also be streamed from your Nvidia-powered desktop using GameStream. Other modes of connectivity include Wi-Fi or using a cable via the gigabit Ethernet port. Nvidia also has its own Android game market to purchase games.

Nvidia’s Tegra X1 octa-core (4 Cortex A57 and 4 Cortex A53) processor is what runs the show. The company claims it’s twice as powerful as the K1 processor and with 256 graphics cores (Maxwell graphics) it could easily be just as good as your PC. At a price of $199, the Nvidia Shield that’s also capable of running AAA games might not necessarily give Sony or Microsoft cold sweats, but as it’s advancement continues, I’m sure their respective execs will start getting a few more worry lines.

The new Shield console has plenty to offer from connectivity to hardware specs and other features but it’s not going to be a major alternative for the PS or Xbox systems, what it will be, at that price, is another option for the gaming community to spend on. I know I definitely want one!