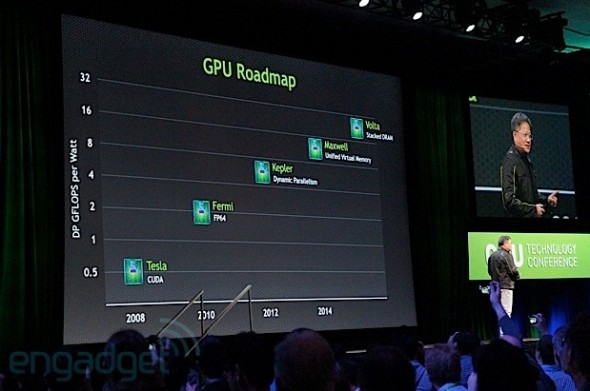 As graphics adapters start mutating into unbelievable powerhouses, we can bask in the hope of having games top-notched as well. Fueling such hope is the newest announcement by Nvidia who have teased us with the Volta GPU. These GPUs will have access to up to a whopping 1TB per second of bandwidth by stacking the DRAM on the top of the GPU. This is made possible with a silica substrate that is introduced between them. Geeks who would like to know how this is functionally possible can hop across to after the jump for more. It is evident that this updation to the CPU roadmap can well draw more efforts from competitors who have not been doing especially well against Nvidia’s unrivalled releases.


A hole is cut through the silicon, connecting each layer, making it possible to move. The company states that “all of the data from a full Blu-Ray disc through the chip in 1/50th of a second.” There is no price or date tied to the arrival of the Volta GPU line but who’s not eager for this one?