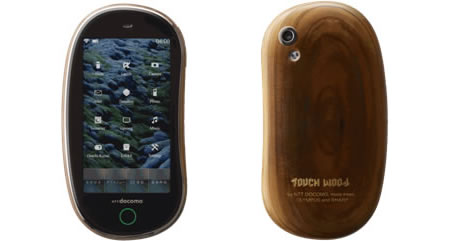 NTT DoCoMo has developed a mobile phone prototype made with the surplus wood of trees culled during thinning operations to maintain healthy forests. The prototype was created in collaboration with Sharp Corporation, Olympus Corporation and more trees, a reforestation project founded by musician Ryuichi Sakamoto and others. The authentic cypress wood body of the prototype, which is named Touch Wood, features excellent durability and resistance to water, insects and mildew thanks to special three-dimensional compression molding developed by Olympus Corporation.The prototype phone’s graphical user interface (GUI) is based on the photographic art of Mikiya Takimoto, a more trees advocate. 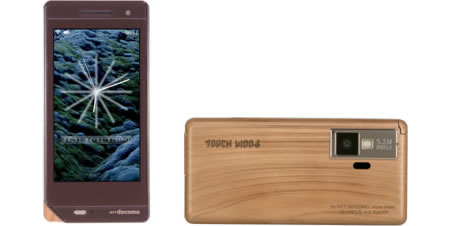 Each Touch Wood handset features its own distinctive grain patterns and natural coloring. No artificial colors or paints are used, so the cypress retains its original natural appearance and aroma. The wood also has an attractive shine that is created during the compression process. A mockup of the Touch Wood handset will be exhibited at ITU Telecom World 2009 in Geneva, Switzerland from October 5 to 9 and CEATEC JAPAN 2009 at Makuhari Messe, Chiba Prefecture, Japan from October 6 to 10.
[Fareastgizmos]