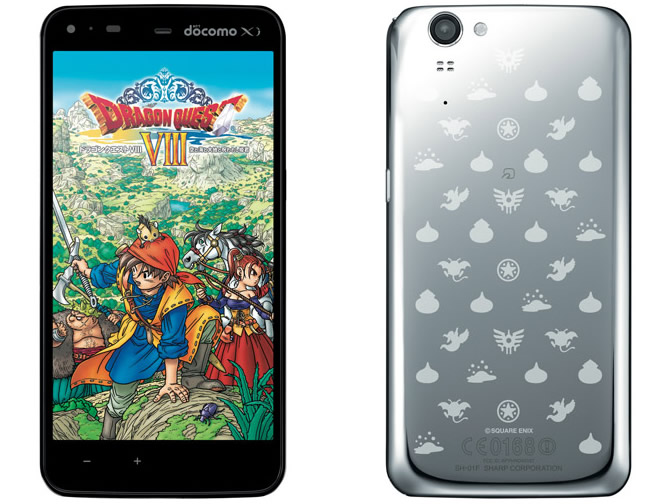 Dragon Quest fans in Japan will be happy to hear that NTT DoCoMo will be launching a special edition smartphone. In collaboration with developer Square Enix, the SH-01F Dragon Quest handset manufactured by Sharp, will be heading to stores in that part of the world in the first week of December, so if you haven’t emailed Santa yet, it’d be a good time to do so now. The metal housing of the device will be adorned with a metal slime coloration and will feature popular logos from the game all over the panel. Naturally, the handset will ship with all kinds of Dragon Quest goodies pre-loaded. For one, the mobile version of the game will be on board – Dragon Quest VIII. In case it’s not already there make sure you get the installation code so you can still download it for free. Wallpapers etc will also be on provided.

The SH-01F has specifications that include a 5 inch LCD panel with a full HD (1920 x 1080) resolution. The battery under the hood is 3000 mAh which is quite impressive. It will run Android Jelly bean version 4.2 from the get-go which is a bit of a bummer seeing as Kit Kit is already rolling out to other devices. Its processor is a 2.2GHz quad-core Snapdragon edition and the camera is of the 16MP CMOS variety. The handset weighs in at just 139g and is just 8.9mm in depth and is also supposed to be IPX5 complaint making it waterproof to an extent.