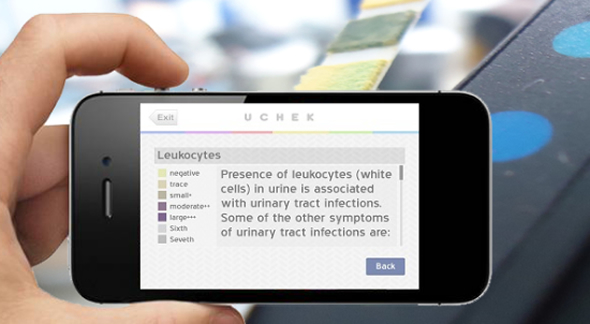 Now, urine tests possible in your own urinal, with Ucheck iPhone app

They said that iPhone apps can do any and everything. So why not go ahead and make something as useful as an on-the-go urine analysis checking app? Called Ucheck (for obvious reasons), the app allows people to use their iPhone to analyze their urine over time. Devised and developed by one Myshkin Ingawale, who presented it at the TED 2013 conference, this looks like a promising, time-saving and inexpensive alternative to urine analysis in a pathology lab. However, it cannot completely substitute the latter. At an earlier conference, the developer showed off the app’s capabilities of testing hemoglobin in the blood, sans needles. Ucheck can analyse the urine for glucose, proteins, nitrites, bilirubin, and other such components.


It is quite convenient too, as it simply involves collecting the sample in a cup and dipping a test strip. The phone’s camera analyzes the color of the strip and offers results on the go. The app costs just 99 cents while a pack of test strips come for $20. It’s as simple and affordable as that.