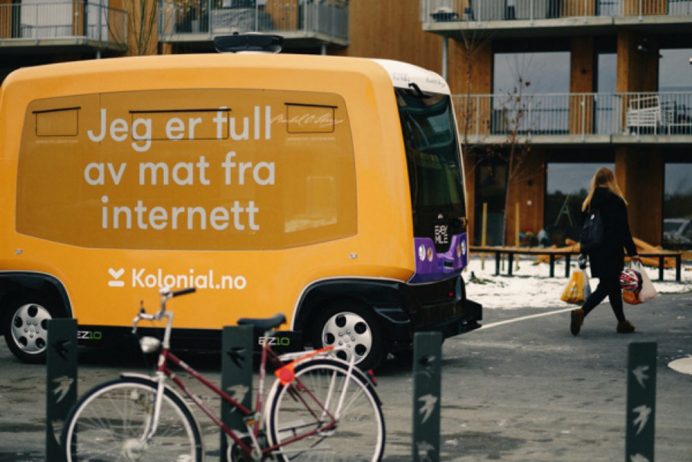 Norway has introduced a revolution in a very basic but essential activity – grocery shopping. Kolonial.no – the country’s biggest online grocery store, has started beta testing new self-driving vehicles, featuring the slogan “I am full of food from the internet”. The vehicle demo took place on November 11, 2016, in Baerum, Norway.

Kolonial.no came up with this ingenious initiative in collaboration with Acando, an IT consulting company. The world’s first self-driving grocery store is the outcome of their collective decision to try new technological possibilities in grocery delivery.

Marketing Manager of Acando, Marianne Sorby Rogeberg, revealed that the average price of each such self-driving vehicle would be approximately USD 240,000. In the initial stages, they would probably use around 30 vehicles, and this number would swell to 100 or more in course of the first operating year.

At a recent press conference, Co-Founder and CEO of Kolonial.no, Karl Munthe-Kaas, mentioned that “The idea is to use the already existing automatic and self-driving functions to deliver groceries in a simpler and cheaper way”. He added that these autonomous grocery delivery vehicles do not drive over 40 km per hour, are tested safe, and can easily stop wherever they are instructed to. Customers can either have their groceries delivered at their door step or pick them up at one of the 30 designated pick-up points. In addition, an online app will help customers track where exactly the autonomous vehicles are located, helping them figure out when and where they would prefer to have their groceries delivered/picked up.

The country opines that this clever initiative by Kolonial.no will not only ease grocery shopping management, but the plummeted distribution costs will get passed on to consumers, bringing about cost-effectiveness and saved time as well.

Munthe-Kaas called on the Norwegian Government to pass new regulations in order to facilitate these new innovations, at a gathering where Norway’s Transport and Communications Minister, Ketil Solvik-Olsen was present. Corroborating his complete support and approval, Solvik-Olsen termed this project “Revolutionary, driven by many smart people.” He also said that he would introduce a bill to approve projects like these next spring, anticipating the Government’s decision next summer.