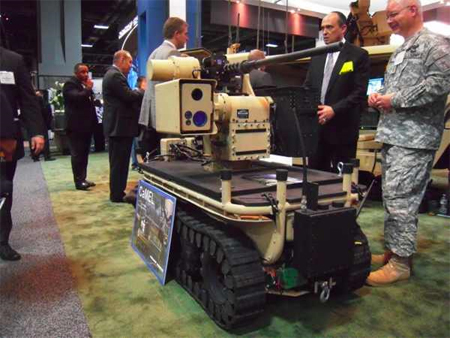 Earlier this week there was a bit about America’s National Nuclear Security Administration who had built a little buggy-like robot to monitor radioactive waste dump and we also heard how Israel had perfected and weaponised a similar robot called the Guardium, to patrol their border. Well seeing as government or military owned robots are in, here’s one more – it’s called the CaMEL (Carry-all Mechanized Equipment Landrover) and is developed by Northrop Grumman. It can transport heavy gear (1,200 pounds) at about 7mph and oddly enough 60 have been sold to the Israeli military. The one shown in the picture is equipped with a .50-caliber M2 machine gun which is remote controlled via a touch sensitive system. If you’re unsatisfied with the M2 you could always swap it for an M249, the MK19 grenade launcher, or 30mm cannon or a water gun if you care. Anything to scare off the enemy.
Engadget