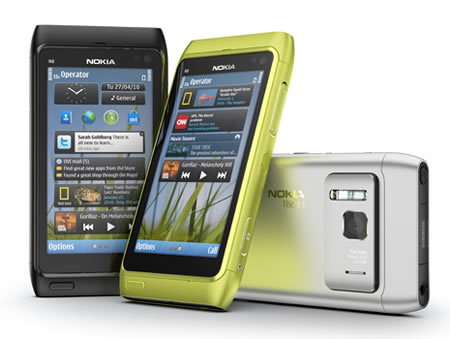 Finally the Nokia N8 breaks its way free into the daylight. This Nokia’s very first device to be powered by the brand new Symbian^3 platform and be loaded with a 12 megapixel shooter. Complete with Carl Zeiss optics and Xenon flash the camera and OS are the handsets biggest assets for now. We already know from the preview that the N8 is going to record HD videos up to 720p and watching playback on the large 3.5-inch capacitive touchscreen, with multi-touch will also be a bonus. The HDMI out is now confirmed as well, but no word on if it’s standard as the guy who previewed the handset mentioned he had issues fitting in a standard HDMI cable. Nokia’s also taken on a Dolby Digital Plus surround sound engine to boost the handsets audio capabilities, sweet! It’ll also have a Web TV application for access to news and entertainment on the move.

The Nokia N8 also has 16GB of built-in storage and is expandable up to 48GB with a micro SD card. Keeping up with the Social Networking times of today the N8 also enters the fray with live Twitter and Facebook updates direct to your homescreen. Comment, read and send messages, update your status and share your location and photos with one touch. Of course the free global Ovi Maps walk and drive navigation with support in more than 70 countries worldwide is also on board. NOkai has also adopted the multiple homescreen system with a total of three customisable homescreens that can be loaded with applications and widgets and flicked through by a swish of the finger. There’s also improved 2D and 3D graphics for a faster and more responsive UI, greater memory management and a visual task manager.
Aluminium is the latest trend in building material and the N8 is not being left behind. Carved from a single piece of anodised aluminium the N8 will be available in five colors It will cost €370 which works out to about $492 (before the usual local taxes and subsidies) when it starts shipping in the third quarter of 2010.
Nokia