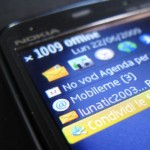 Walking in a room and plugging your mobile to a charging port is one of those tasks we have often forget to do. However Nokia and a few other mobile companies have joined the Wireless Power Consortium, which pushes a universal standard for over the air charging, called Qi. It’s just like a microUSB port, but without the cables and you’ll get the idea of what it is aiming to achieve. After Dell announced its wireless charging laptops, Nokia is the latest entrant to the wireless charging bandwagon. Wireless contact charging has already been proven with gizmos like the Palm Touchstone.
Via [Electripig]