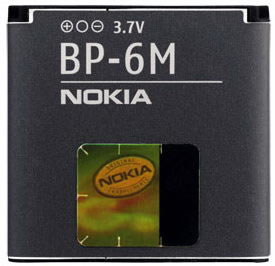 Nokia BP-6M batteries not to be trusted

It was just not their winning series. The N-series of Nokia was launched with such vigor and gloss that almost every Nokia enthusiast grabbed a piece of their liking only to realize too soon that their wonder machines had more cons than pros. The company has released a statement that its battery BP-6M found in certain phones of the series like N73, N77 and N93 (the GPS was the winning status!) could increase its size to more than its normal size. The thought is hazy, as you would think the battery remains enclosed and locked into the phone set so ballooning the size would literally mean bursting the entire handset.

As the saying nothing is perfect and that probably stands for lifesaver Nokia as well. Let’s just hope and try to believe the company when they say only a limited number of Nokia BP-6M batteries has blown up.
Source