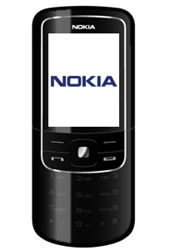 The rumoured Nokia 8600 is now a bit closer to reality as Carphone warehouse has posted it on the coming soon page. Carphone is saying the phone is so new that it does not even have a name. It definitely has one, ‘The Nokia 8600 Luna’. The phone will be a bit cheaper than the Nokia 8800 but still manage to cut it in Nokia’s ‘premium’ category.Detailed specs are not known but the Series 40 slider packs in a 2 MP camera, 1 GB of internal memory and MP3 player.

The Nokia Fashion High mobile phone is so new it doesn’t even have a model number. As its code-name suggests, this is a handset with a distinctly fashionable feel. The rounded corners and smooth features give it an almost-futuristic appearance – as does the on-screen menu system.
Source via