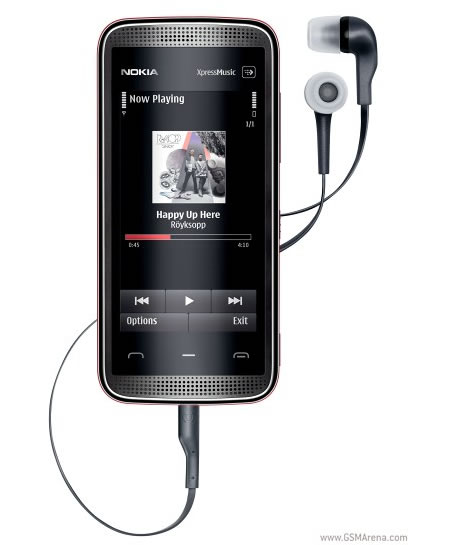 The successor of Nokia 5800 XpressMusic, the Nokia 5530 XpressMusic was revealed at the Nokia Connection event in Singapore. This phone is the third S 60 5th edition handset for the company, after the very popular Nokia N97 and 5800 XpressMusic. The 5800 XpressMusic phone is a touch phone, with a 2.9″ 16M color display with a resolution of 640 x 360 pixels. It has a 3.2 megapixel camera with LED flash, along with innovative features like an accelerometer sensor and proximity sensor for precise pictures. Considering it’s a music phone, the Nokia 5800 XpressMusic has powerful stereo speakers and a 3.5 mm standard audio jack. The phone surprisingly doesn’t have GPS unlike Nokia’s other touch phones, which seems like a move to bring the price tag down. The phone also doesn’t support UMTS/HSDPA, which puts it in a lower market segment.

Available in five different colors, the Nokia 5800 XpressMusic will be available in the third quarter of 2009, along with a 4 GB microSD card in the boxes at an estimated price of 199 Euros (not sure if i should convert the price in $).