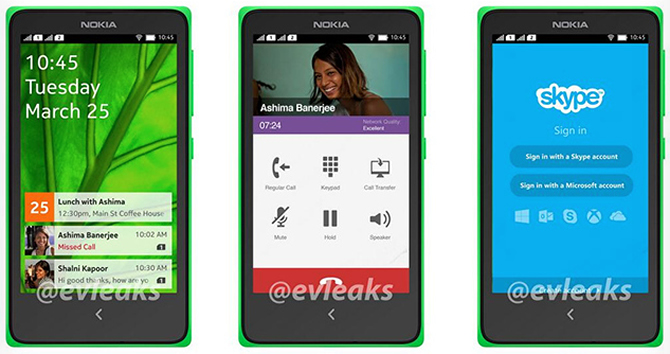 It’s common knowledge now that Nokia are in the works of building their very own Android phone, which is currently codenamed ‘Normandy’. We are all eager to look forward to it. So, when we come upon a leak that hints at showing us an early glimpse of this famed phone, we are more than please to get our hands and eyes all over it. In fact, there are three different variants show off in the image that shows the refurbished UI. One of them displays a Skype app running on one of the devices while the other two offer Viber and lock screen glimpses. The blend of Asha and Windows Phone looks is plainly apparent in the snapshot. Another obvious deduction from the image include dual-SIM support.

Some time back we heard about how the Normandy device would use an alternative version of Android ‘that’s not aligned with Google’s own version’. The Microsoft Nokia acquisition deal will decide the fate of the Normandy phone.