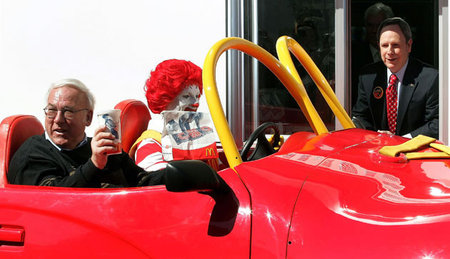 No car and fast food neighbourhood will make you fat

This is a funny survey. The September issue of the Journal of Urban Health did a study where they say that if you don’t own a car you tend to become fatter. Why? Because it makes you walk to your closes restaurant and you can eat! They studied 2,156 adults from the Los Angeles Family and Neighborhood Study database and found that car owners weighed about 8.5 pounds more than those who didn’t own cars on average. And they ALSO found out that in neighborhoods with many fast food places, non-car owners weighed 12 pounds more than car-less folks in areas without fast food restaurants, and 2.7 pounds more than their neighbors who owned cars. So you only become really thin if you had no food outlets nearby and neither a car to drive to one. Don’t have many comments on this.
[Autoblog]