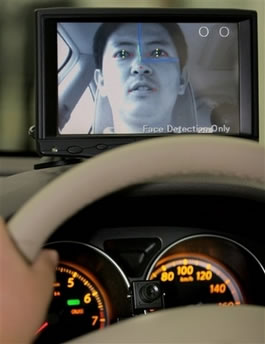 In a bid to make its cars even safer, Nissan will soon fit its cars with a gas pedal that lifts to warn of possible collisions, at the same time the car will automatically stop if driver takes his foot off the accelerator in response to the warning. The technology used combines radar sensors and a computer system that gauges the car’s speed and the distance to a vehicle in front. Cars with the new safety features will be available this year in Japan, and next year in the U.S. Another experimental system showed off by the company hopes to tackle dunk driving, which causes more than 600 fatal accidents-a-year in Japan. They have developed a system that measures alcohol levels in a driver’s sweat from sensors in the gearshift. The system almost locks down the ignition and issues an electronic warning.

The experimental system from Nissan can also recognize if a driver is changing lanes often, and comes with a computerized camera that monitors blinking to check if a driver is drunk or drowsy. This experimental system will probably find favor with commercial users such as delivery trucks and taxicabs. However Nissan’s more practical lane departure prevention technology will be offered later this year in the U.S. on the Infiniti EX luxury model. Nissan also displayed a dummy crash test to “demonstrate bumper sensors that release a hinge to lift the engine hood slightly and soften the impact if a pedestrian is hit.” The pop-up hood will be offered in Japan this year, Nissan said. Jaguar, owned by Ford Motor Co., and Honda Motor Co. already offers the feature.
Check the video.