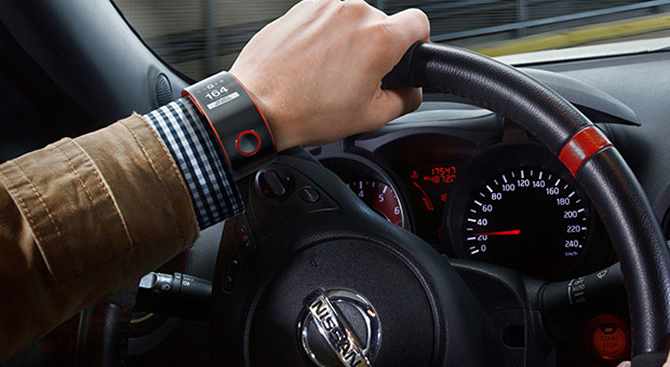 Wearable technologies market segment is bustling with a lot of activity. All the major players have jumped into the segment but no one really expected Nissan to join the league – or at least the queue. Nissan’s racing division Nismo has revealed its intention to launch a smartwatch with a snazzy promo video. The Japanese company will showcase the concept wearable at the upcoming 2013 Frankfurt Motor Show. The bracelet-looking wrist-wear, when launched, won’t be competing with Galaxy Gear or Apple’s rumored iWatch. It’s being specifically developed in line with the Nismo Motorsports line-up.

Meant for racers, the watch is capable monitoring and analyzing vehicle’s performance while displaying it on the screen. The Facebook and Twitter logo suggests it has social media integration with the possibility of uploading stats online in real time. The wrist-wear can also monitor heartbeat and alert the driver if it crosses dangerous levels. The Nismo concept smartwatch can connect with smartphones via Bluetooth using proprietary app. Do not expect it to hit the market shelves anytime soon, but we’ll get a closer look at the Frankfurt show.