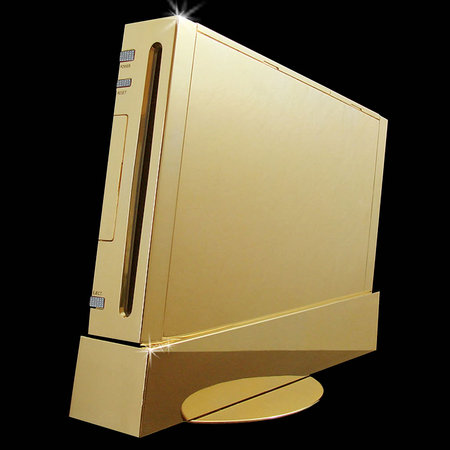 Stuart surely understands that all work and no play will make Richie Rich dull. So, apart from blinging cell phones, iPods, USB drives and watches, he has gone a step further by dressing up playtime material too. If the Diamond Edition Chess gets too serious for leisure then check out the most unique and expensive Nintendo Wii SUPREME in the world. The £299,995 ($487,000) price tag is justified as the gaming station is cast out of 2,500 grams of solid 22ct gold. The three diamond studded buttons on the front are like cherry on icing. In all 78 diamonds total up to 19.5 ct. Uniquely designed and crafted by Stuart Hughes himself, the World’s most expensive gaming console certainly deserves a honorable mention on our Most Expensive Things of 2009 – Part Deux.
Via – [Luxurylaunches]