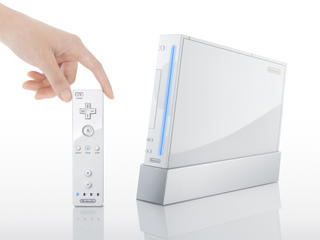 The controller features core elements along with some you wouldn’t expect. A power button at the top left of the unit appears to let you power the Revolution console on or off. An old-school digital D pad rests just below the power button. A large GameCube-controller-style A button is prominently placed below the D pad. Its counterpart B button is located on the opposite side of the remote, like the Z button on the Nintendo 64 controller. Directly below the A button is a series of three buttons. Below the select, home, and start buttons is another set of vertically aligned buttons labeled X and Y. On some of the prototype controllers we looked at, the X button had a small “B” next to it and the Y button had a small “A” next to it, indicating that the controller can be held sideways to approximate a classic NES controller. Directly beneath those buttons is a horizontal row of colored lights that indicate which controller slot the owner is using–1 to 4 are planned at the moment. The plan is for the controllers to include built-in rumble packs and to run off of batteries.

Finally, the base of the controller features a unique plug that lets you make use of a wide variety of peripherals. One such peripheral is an analog stick attachment with two shoulder buttons labeled Z1 and Z2. Though it gives the combined items an odd, nunchaku-like appearance (which is actually Nintendo’s tongue-in-cheek nickname for it), the add-on demonstrates the controller’s versatility. The analog stick peripheral will come included with the Revolution hardware, with other attachments to follow in the future.
One of the most interesting features of the peripheral is tied to its functionality as a “pointing device.” A glossy section of the top of the controller houses a transmitter–much like any remote would have–that was used extensively in the demos we saw. The signal from the unit is picked up by sensors you’ll place near your television, which will then reflect your actions on the screen. Via Gamespot