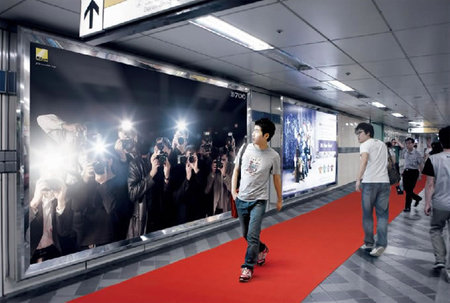 Putting some passion into their work, Nikon have come out with some rather cool promotional billboards to woo buyers into getting their new D700 phone in Korea. The idea was pretty simple. The billboard had a picture of paparazzi scuffling over one another in an attempt to get the best picture of a celebrity. The only thing missing in the snap was the celebrity. In fact, the image was taken in such a manner that those passing before the billboard appeared to be celebrities themselves, with the photographers in the image too eager to get a shot. To add to the rising self esteem of buyers who made it to the mall that had this setup, Nikon also made sure that there was a red carpet simulation on the floor.

Now tell me, who in their right senses would miss a chance to pick a camera that gives you such a VIP treatment, even before its purchase? I wouldn’t.
[Thecoolhunter]