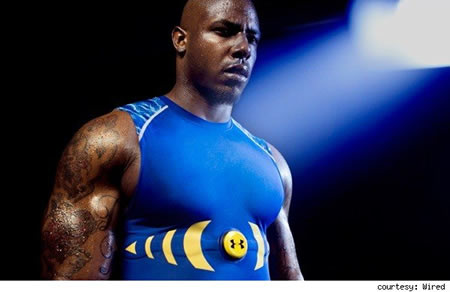 NFL gets sensor-laden Under Armour shirts for players

NFL Combien players will be made to wear an Under Armour shirt equipped with an accelerometer as well as heart and breathing monitors, that will let trainers and scouts view more than just their appearance on the field. According to Wired, the Under Armour E39 shirt is made from the same material as its other compression gear, and weighs less than 4.5 ounces — even with the bright yellow puck stitched just below the chest. An addition is the removable sensor pack called a “bug” which comes with a triaxial accelerometer, a processor and two gigabytes of storage. The E39 collects and shares the player’s performance via Bluetooth to the trainers smartphones, iPads and laptops. Through that trainers can see how powerful each athlete is as well as monitor their heart-rate and breathing-rate. The shirt’s accelerometer monitors the body in parts; for example, it senses the left and right leg independently, so that athletes can find the smallest inefficiencies in their movements and fix them.

After testing it at this weekend’s Combine workouts, Under Armour will put the shirt on contracted players and teams before letting non-contracted teams give it a try and eventually, regular folks will be able to buy one of them, so that we too can monitor our (un)fit self.
[Switched and Wired]