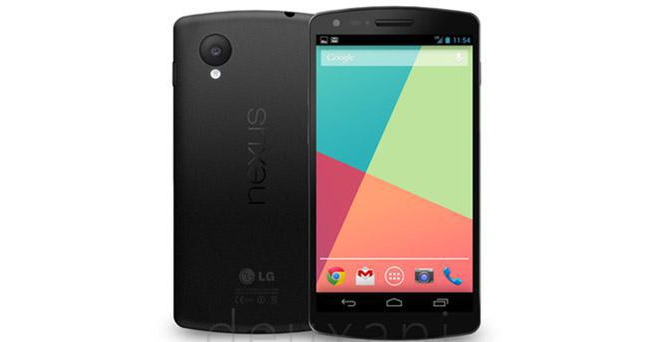 The intensity of the leaks and rumours on the purported Nexus 5 has grown immensely in the past few days suggesting that we’re quite near to its official release date. Though Google has opted to remain silent on it but the sold out stock of Nexus 4 pretty much gives it away. Fresh round of leaks have emerged in the past 24 hours including a video of the device taken inside a bar and a press shot confirming the phone’s exterior.


Almost all the leaked images of the Nexus 5 look similar so we are pretty much sanguine on the exterior of the device. Benchmarking website GFXBench, on the other hand, released quite a bit of information on the specifications of the alleged Nexus 5. The rumored specifications include Quad-core Snapdragon 800 chipset, 5 inch display with a resolution of 1920×1080, 13 MP rear facing camera, 2 GB of RAM, 16/32 GB of internal memory and Google’s newest version of Android –Android 4.4 KitKat. Rumor mills suggest, Google will officially launch the Nexus 5 by the third week of October.