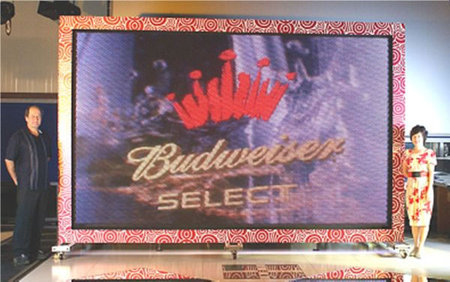 NewSight the US-based company has introduced a 3D display that uses LEDs as pixels. This 180″ display is the first of its kind and measures 3.84m. The 3D LED Video Wall is a combination of four displays that results in a 360-inch 3D display. The 3D forms are achieved via the parallax barrier method that is seen in the company’s other LCD 3D displays. The reason behind using the same method is that most of the techniques, like arraying the slits of parallax barriers at an angle, used on this new display are the same as used in the LCD displays and therefore it is possible to reuse 3D content made for the LCD displays.

The pricing will be determined based on individual order.
The The 3D LED Video Wall is made in China. It is arranged at a pitch of 6mmand is best viewed from about 5m away. The LEDs come with a 20,000 hours warranty and the manufacturers prefer to quote the price of the display to interested parties only.
Source