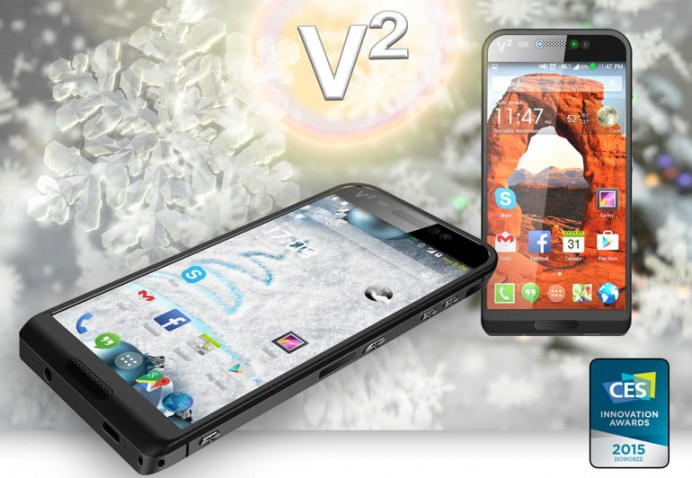 What it all really comes down to is making a product that offers something an audience doesn’t already have i.e. something that an existing multitude of competitors hasn’t tapped into already. No one really wants to be just another face in the crowd and that’s just the kind of thinking that newcomer, Saygus, kept in mind when developing their V2 Android smartphone. The reason why you’ve probably never heard of the company or the handset is because no one else has either. That being said, they aim to become a household name and judging by their offering to audiences at CES 2015, they have a pretty good shot.

To start off with, there’s a certain, je ne sais quoi feeling I get when looking at the V2’s design. It’s certainly not the thinnest handset on the market but there seems to be something familiar and ‘acceptable’ (for lack of a better term) about the rounded edges and curved lower portion. It features a 5 inch touchscreen with a full HD resolution, 3GB of RAM to run Android 4.4.4, KitKat (Lollipop support hasn’t been announced) on a Snapdragon 801, 2.5GHz quad-core processor. It’s loaded up with a 21 megapixel shooter accompanied by two LEDs for the flash and, if you can believe it, a 13 megapixel front-facing camera. If that isn’t enough to make a stand against the competition perhaps the fact that it’s equipped with a Fingerprint scanner and Wireless Qi charging will help push it along. Still not enough? Ok, how about the V2’s 64GB of on board storage, and the capability of adding a 128GB microSD card for a grand total of 320GB? Would that make a difference? If you still need convincing, perhaps the built in Harmon Kardon speakers will add a little more to the sales pitch. 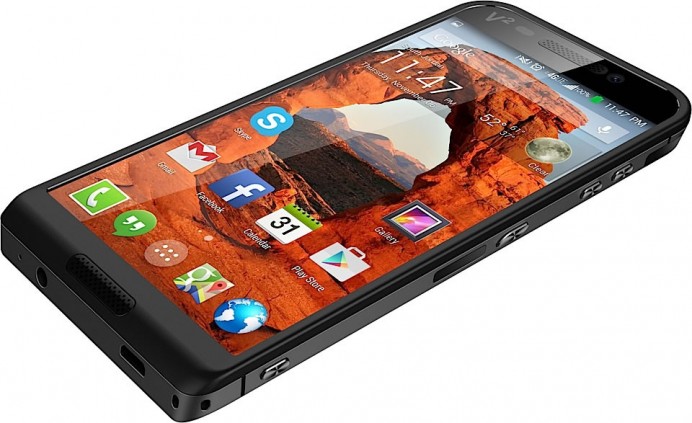 But the Cherry on top of this spec-a-licious smartphone is that Saygus has designed and built the V2 with built-in root access. This is a feature quite a few Android users have been craving these days, especially in the light of devices like the One Plus One and others. The company aims at a US launch soon, perhaps in spring, however pricing for this spec-tacular handset is yet to be announced. Rest assured, I’m going to following the company closely for the information and saving up just in case.