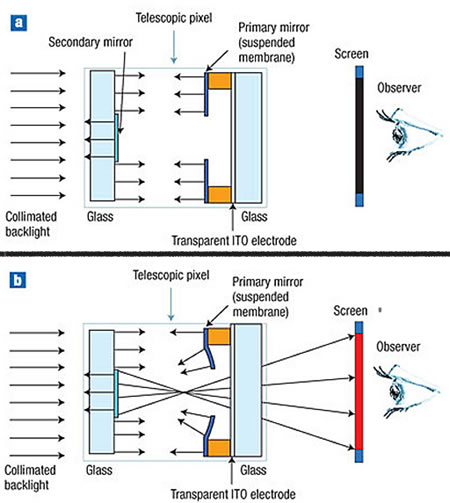 Liquid crystal displays (LCDs) is quite popular with both desktop and mobile computing because image quality, price, and power efficiency provided is optimum. However LCDs could do with a bit of improvisation because they only transmit 5-10 percent of the total backlight to the user, and can account for up to 30 percent of the total power consumption of a laptop. Nature Photonics reports that researchers from Microsoft and the University of Washington are touting a new display technology called “telescopic pixel” that transmits 36 percent of backlight radiation. This new pixel design is based on the optical telescope technology. To elucidate: “Each pixel consists of two opposing mirrors where the primary mirror can change shape under an applied voltage. When the pixel is off, the primary and secondary mirrors are parallel and reflect all of the incoming light back into the light source. When the pixel is on, the primary mirror deforms into a parabolic shape that focuses light onto the secondary mirror. The secondary mirror then reflects the light through a hole in the primary mirror and onto the display screen.

Each pixel is produced in two halves by standard photolithography and etch techniques. The secondary mirror is simply a lithographically patterned array of aluminum islands on glass, but making the primary mirror is a bit more complicated. First, an indium tin oxide (ITO) electrode is deposited on a glass substrate and coated with polyimide. The polyimide acts as a support and electrical insulator for the primary mirror. Aluminum is then sputtered onto the polyimide and photolithography is used to pattern 20 µm diameter holes, forming a two-dimensional array that will eventually line up with the secondary mirrors.
The last step in the primary mirror fabrication is a dry etch, which preferentially removes polyimide from under the holes in the aluminum layer, resulting in sections of aluminum that are suspended in free space. These free-hanging sections of aluminum can be deformed by applying a voltage between the metal and the ITO layer. Once assembled, each pixel is 100 µm in diameter. This fabrication method is low-cost and compatible with the infrastructure currently used for LCDs.”
When tested for performance, telescopic pixels displayed substantial promise for future displays. Backlight transmission was measured at 36%, and simulations indicated that this could reach 56% with design improvements. For example, in today’s kind of laptops with a 5-hour battery life, this could mean an extra 45 minutes of battery time without reducing screen brightness. Pixel response time was 0.625 ms; which is better than LCDs, which have 2-10 ms response times. However the only problematic area with the pixel technology is the contrast. Experimental measurements conducted with non-collimated light showed a contrast of 20:1. Simulations indicate that ratios of up to 800:1 may be possible, which would put these displays on par with LCDs. With stalwarts like Microsoft involved, hopefully we will see a better technology coming our way in the future.
Via – Arstechnica and Electronichouse