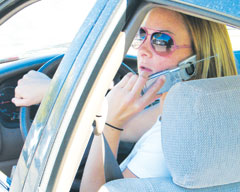 Statistics show that driving while talking on the cell phone increases the chance of an accident by 400 %. Though speaking on the cell phone while driving is not a crime in many states as of yet taking into consideration the statistics it will eventually be banned in all the states. A new company Highway and Safety control is releasing a device to automatically detect drivers talking on their cell phones. Instead of police officer needing to observe a cellphone in use, the system automatically detects a cell phone call and records which car was making the call. Already in use in a few European countries the system will make it to the US this fall it is designed to detect, identify and cite drivers who break cell phone us laws.” . The company attaches a paint gun to mark the car, or even an EMP gun that can disable the offending cell phone.

The company is the first in the world to develop such a system.