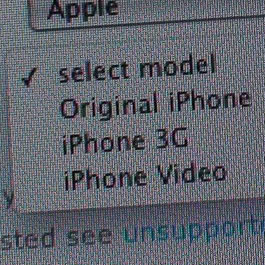 There is a screenshot that depicts an unpublished version of AT&T’s support website which reveals that may be the next generation iPhone – iPhone Video. The screenshot was sent by a tipster, who shows a dropdown menu of iPhone model choices, and iPhone Video appears beneath iPhone 3G. One thing is that it does corroborate with the rumors that a new iPhone is coming with video recording capability. Well if you have a better name suggestion other than the iPhone Video, sounds neat though, do let everyone know.
[Wired]