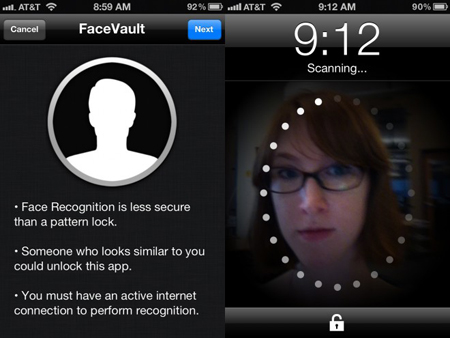 iOS users with unusual facial features now have a promising way to keep their phones secure. The new FaceVault application for iOS devices now enables face-recognition unlocking, a boon to those who simply look different, and a bane for those who look like every third person around them. That apart, the new system is similar to that found on the Android 4.0 and uses the front-facing camera along with server based processing to analyze your face against a Eigenface algorithm. Also, if the software simply refuses to acknowledge your face, you are passed on to a second screen that enables unlocking via a pattern-based tap code to prevent lock-outs.
[wired]