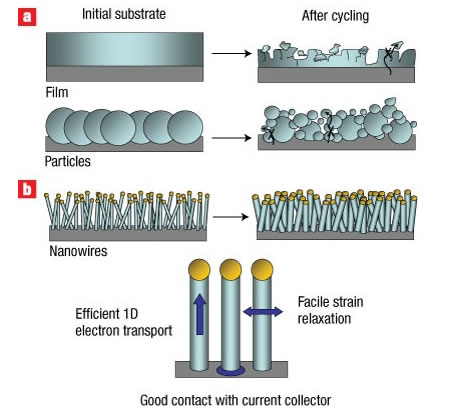 Good news awaits all lappie users, in the coming years charging your notebook or carrying cable for charging will be a thing of the past. Good fellas at the Stanford Tech are researching and developing a battery that will be able to keep you notebook powered for a whopping 40 hours! This new kind of lithium ion battery will be available in a few years time. Stanford Tech researchers including Professor Yi Cui and his team have brought alive an old but abandoned method for charging the batteries: Silicon anodes. These have a theoretical capacity ten times larger than that of the graphite anodes currently used, but were left for dead, as they expand up to 400 times when charged, smashing themselves in the process. However, if the silicon is made into nanowires the problem diappears. The silicon still expands, but doesn’t pulverize the battery.

Instead the nanowires jostle closer together, but don’t break, and still transfer charge into the lithium.
Source