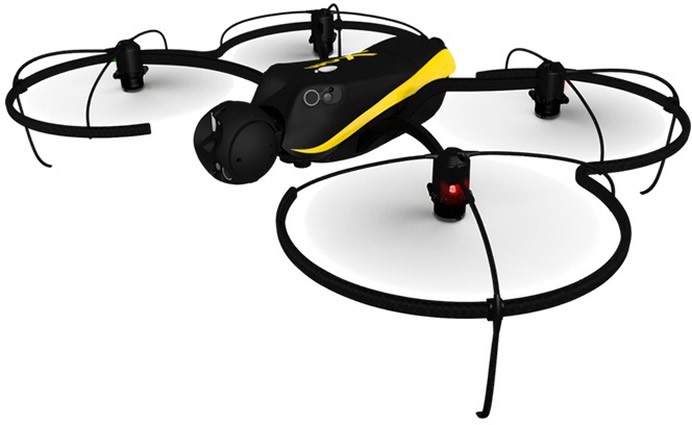 Commercial drones are getting more sophisticated with each new iteration. Take for example the senseFly eXom drone that was showcased by the Swiss manufacturer at CES 2015. It comes fully loaded with features that make it quite technologically advanced for its class and will come in quite handy for the professionals that would use it.

Picking up from the BeBop Drone that made it out last year from Parrot, senseFly’s (who is also a Parrot company) eXom features an auto pilot mode that would typically allow the UAS to do an assigned/programmed job with limited supervision. Thanks to its plethora of sensors that include t ultrasonics for proximity alerts, it can avoid obstacles (of course the shock-absorbent carbon fiber shrouding will nonetheless protect the eXom’s rotors in case of surface contact). Designed for inspections of hard to reach places, the eXom is equipped with a TripleView head fitted with HD resolution cameras that should offer 270 degree vertical field of view. Users will be able to capture and record all kinds of details in High Resolution and even use the device for 3D mapping when required. A recent post also stated that the drone’s five vision sensors allow the operator to see in the direction the drone is moving – automatically and without needing to turn the system’s main camera head. The TripleView camera set up also features LED lighting, a thermal camera, a wide-angle video camera and an ultrasonic transmitter and receiver. On board GPS is what allows the device to find its way around when in auto-pilot mode, and thanks to a handy flight plan function, one can simply program the drone with instructions and locations that wish to be survey and let it do its thing.

This not-so-large bug-shaped drone should prove to be quite handy for the likes of bridge builders and construction or survey crews that need to inspect areas that are hard to reach.