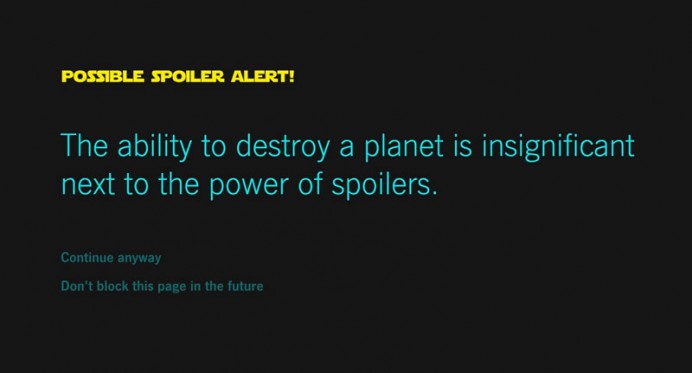 There’s nothing more despicable than Darth Vader himself, than spoilers. There are a few amongst us who regularly succumb to the dark side and end up online with a bunch of spoilers in tow. Now, with the release of Star Wars: The Force Awakens right around the corner, Chrome has come to our rescue with a special extension that promises to block all Star Wars spoilers. The extension is a handy tool to keep your suspense intact, and will block pages with mentions of the upcoming movie’s script, using extremely smart Google technology and the mystical energies of the Force.

The extension is called Force Block and will block pages containing spoilers from Star Wars: The Force Awakens, with smart pattern detection and a whitelist for false alarms.” Simply put, the moment the extension detects a spoiler on a website you’re visiting; it’ll quickly post a warning message reading, “Possible Spoiler Alert! The ability to destroy a planet is insignificant next to the power of spoilers.” This seems to be a pretty cool idea, given the fact that the internet is packed with geeks who’re evil enough to spill the beans on the movie after having watched it before everyone else, simply because they can.