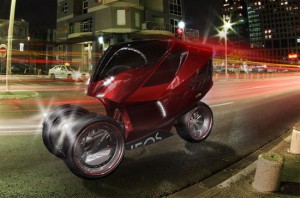 It may not be the sleekest of them all but it surely packs in some rude ruggedness in its built. The front tires of the 2-seater electric car, bears no spokes at all. Inside the vehicle, it packs in touch-screen displays, GPS systems, sideview cameras and cellphone docks as well. If you feel that it’s not safe enough then fear not. The NEO Concept Vehicle also packs an airbag at the side, thus indicating the importance paid to the safety measures of your car and life.

The future isn’t far away. It’s far enough to take driving and mix it with a hoard of other professional geniuses that would eventually make all these concepts comes true.
Coolest-Gadgets