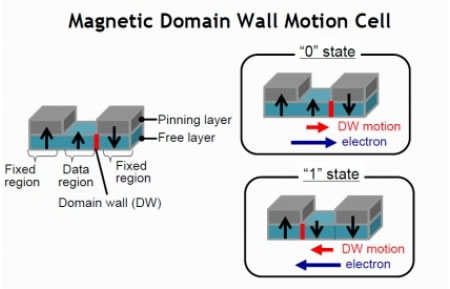 NEC along with Tohoku University has developed the worlds first content addressable memory which can store data even when the power is switched off. CAM is widely used in computer networking equipment which require a short amount of time to start and their internal circuits remain active when the equipment is in standby mode. The new CAM in combination with existing nonvolatile memory can enable the development of electronics that start instantly and consume zero electricity when in standby mode.
[Press release after the jump]

Tokyo, June 13, 2011 – NEC Corporation (NEC) and Tohoku University announced today the development of the world’s first content addressable memory (CAM) (*1) that both maintains the same high operation speed and non-volatile operation as existing circuits when processing and storing data on a circuit while power is off.
NEC’s new CAM is a part of spintronics logic integrated circuit technologies that utilize the negative properties of electrons together with the spin magnetic moment (*2). The new CAM utilizes the vertical magnetization of vertical domain wall elements (*3) in reaction to magnetic substances in order to enable data that is processing within the CAM to be stored on a circuit without using power. This contrasts to conventional technologies that required data to be stored within memory. As a result, data can be saved on circuits even when power is cut from the CAM.
In recent years, the use of ICT equipment has steadily increased due to the widespread growth of cloud computing. Most existing equipment requires a short amount of time to get started and internal circuits remain active when the equipment is in standby mode. Therefore, the growing consumption of power by ICT equipment in standby mode has become a serious concern.
Use of the new CAM in combination with existing nonvolatile memory is related to greater non-volatility of CPU for electronics and other storage devices. Furthermore, use of this new CAM enables the development of electronics that start instantly and consume zero electricity while in standby mode.
Key features of these newly developed technologies are as follows:
High-speed data retrieval
In order for CAM to be both nonvolatile and maintain a high speed, two spintronics devices, spinning in opposite directions to one another, were connected within the same cell. In terms of constructing the circuit, writing is done once by connecting two devices in a series using recently developed three pin particles that separate the current path into writing and reading.
This new process enables cells to become more compact since the number of writing switches per element is reduced by one. Moreover, the new CAM achieve the same level of high-speed data retrieval as current CMOS based CAM that feature 5ns and low power consumption of 9.4mW.
Approximately half the circuit area in comparison to existing technologies
In addition to the vertical domain wall element can connect in series by separating the route of current into reading and writing, the newly developed CAM circuit technologies can reduce the number of transistors from eight to three in every two cells by sharing transistors. This results in a 50% CAM area reduction.
NEC developed nonvolatile particles aiming for both greater convenience and energy conservation. Additionally, NEC and Tohoku University developed a simulation technology for a circuit diagram including spintronics particles in parallel with designing technologies for massively large integrated circuits for developments involving the most advanced spintronics logic integrated circuits.
Looking forward, NEC and Tohoku University will continue to drive the latest developments of integrated circuits that capitalize on spintronics technology.
NEC and Tohoku University will announce their latest results on June 17 at VLSI Circuit Symposium 2011 (June 13-17, Kyoto).
This research was supported by JSPS through its FIRST Program. (R&D of Ultra-low Power Spintronics-based VLSIs, PI: Hideo Ohno).(*4)
(*1) Content Addressable Memory (CAM): CAM is a fast data retrieval circuit where memory and comparison circuits are combined. This compares to conventional memory where data retrieval takes place by addresses within the memory.
(*2) A small magnetic disposition which electron has negative charged particle.
(*3) The most optimized element in terms of structure and material for circuits to create magnetization through small magnets positioned vertically to the current. NEC has developed these technologies as a part of the NEDO “Spintroics nonvolatile function technology” project. Devices have been modified for logic integrated circuits.
(*4) This is a national project aiming to improve Japan’s competitiveness at the world level by concentrating on leading researchers of the most advanced technologies.