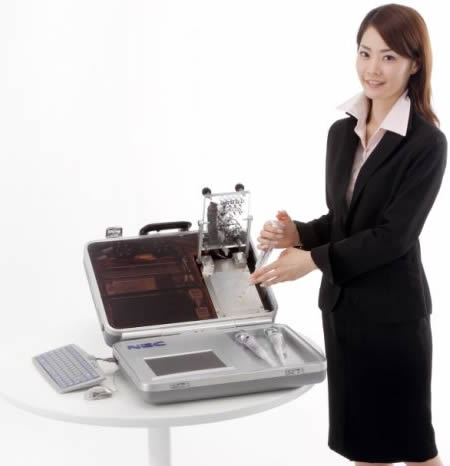 Japan’s NEC Corporation along with Aida Engineering have developed a briefcase-sized DNA analysis system that enables the police to perform comprehensive DNA testing at crime scenes in as little as 25 minutes. The same test would take at least a day to a week (if re-testing or conformation is required) in the lab. The system measures 50 x 40 x 20 cm (20 x 16 x 8 in.), and is compact enough to be carried to crime scenes or other locations where quick DNA analysis is required. “The compact unit can be used to: (1) take cell samples, (2) extract the DNA, (3) perform polymerase chain reaction (PCR) amplification to generate copies of the DNA, (4) perform electrophoresis to measure the spacing between DNA bands (to create the genetic fingerprint), and (5) perform short tandem repeat (STR) analysis to create a unique genetic profile for the individual,” NEC is calling it the world’s first portable DNA analysis system which can handle everything from extraction to analysis.

The DNA testing in a briefcase system will be shown at the 18th International Symposium on Human Identification scheduled for October 1 to 4 in Los Angeles, and at a meeting of the Japanese Association of Sociology of Law scheduled for November 8 in Tokyo. Aimed at the law enforcement officials the kit will be released in 2008.
Via – NEC Japan and Pinktentacle