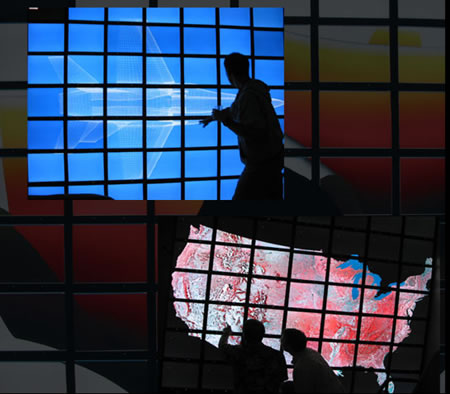 NASA’s Hyperwall the future of HDTV?

The NASA Hyperwall is located at NASA Ames research center at Moffet Field, Ca in Silicon Valley, each of the 49 screens is driven by its own Dual 2 Ghz AMD Opteron processor with nVidia GeForce 4 Ti4600. In addition, with 100 gigabyte of disk space and one gigabyte of RAM per node, the system has approximately five terabytes of aggregate disk space, and 50 gigabyte of aggregate RAM. With more then 64 Million Pixels, over 55 Square Feet of Viewing Surface, and 100Gb/s of visual Output the NASA Hyperwall is one hell of a setup.

In powerwalls, a single rendering task is spread across multiple processors and then the multiple outputs are tiled into a single seamless “superdisplay”. In contrast, the hyperwall emphasizes displaying multiple independent – but related – images, and providing useful means for composing and controlling these image sets. In place of elaborate software or hardware crossbar switches, we rely on the human visual system for integration, synthesis, and pattern discrimination in complex and high-dimensional data spaces.
The hyperwall uses a standard Linux operating system on the master node and on each slave node. The master node controls each screen by broadcasting commands to each of the slave nodes. Using the ‘growler’ software package (developed by the visualization team in the NAS Advanced Supercomputing (NAS) Division), which is designed for distributed programming, NASA scientists are able to control the location of processes and images with the master computer. Additional software tools and custom utilities created by NAS visualization experts are designed to give scientists more functions to work with. The hyperwall can display a single image distributed across all 49 screens, or sets of related images functionally connected in different ways. The system can be used as a giant spreadsheet, allowing researchers to convey information from parameter studies, or to efficiently explore high-dimensional relationships using linked scatterplots. The system’s strength lies in its ability to take one simulation and look at many different quantities, cross-sections, magnifications, and time steps. The system also permits ‘interactive visual supercomputing,’ a term coined by the visualization scientists in the NAS division to describe how scientists are able to watch and interact with computations in real time. In addition to providing detailed views of scientific images, the hyperwall provides a tool for computer scientists to monitor the performance of the 10,240- processor Columbia supercomputer. A NASdeveloped Columbia monitoring tool displayed on the hyperwall helps systems analysts computing issues by displaying dynamic resource utilization in real time. Because the entire hyperwall system is based on commodity technology, rather than highly specialized, expensive projection equipment, the system can easily be scaled to include more screens at a reasonably low cost. 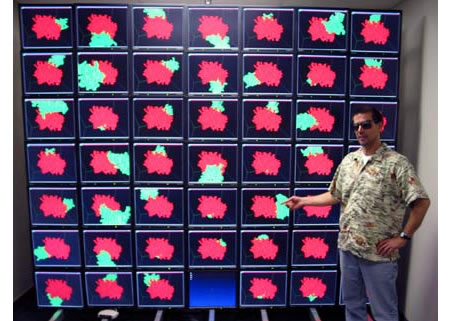