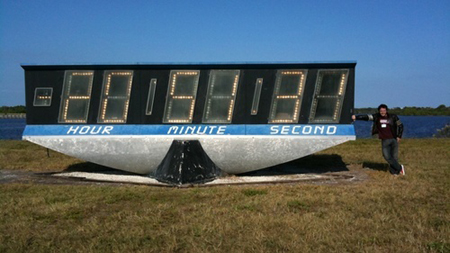 NASA has the grandfather of all countdown clocks

NASA surely need countdown clocks more than anyone else on the blue planet. Their clock at Kennedy Space Center is mighty huge. It makes use of huge incandescent bulbs to digitally display the countdown sequence. Well, the ‘bigness’ of the clock was (re)discovered by a keen eye at Gizmodo and it seems rightful to make it feature here on NewLaunches, even though it’s been around quite some time. It seems to be around since the launch of Apollo 8, back in ’68. The Space Shuttle Discovery will be launching tomorrow. This clock will surely resonate its awesomeness once again.

The sands of time do not seem to run out for some jewels. No matter how battered and thrashed they appear. Hats off to this masterpiece from all of us at NewLaunches.
Source