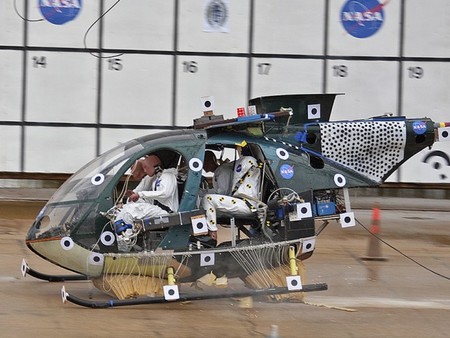 NASA believes that if cars can have it so can choppers. We’re talking about Air bags, just in case you were wondering. At their Langley Research Center in Virginia, NASA’s engineers have devised a test center for coming up ways to better protect passengers who could be victims of helicopter (or other small flying vehicle) crashes. The system, called a “deployable energy absorber” is actually a cash absorbent Kevlar honeycomb material that will deploy on the underneath of the vehicle to help protect it form extreme collision. The same 240 foot tall structure that was used to teach astronauts how to land on the moon was used by NASA to conduct these tests. So far during testing, the only ones who managed to get away without a negligible amount of discomfort were the test Dummies, the chopper sadly didn’t make it.