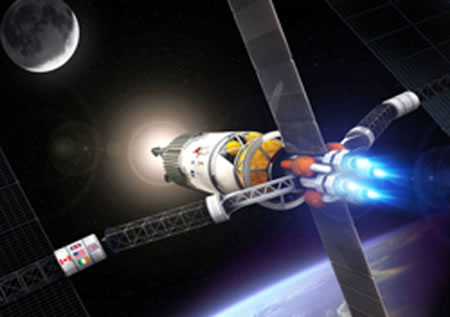 Designed by a former astronaut, the prototype of a plasma rocket engine design could be flying out to the International Space Station for testing by NASA. The engine is called a Variable Specific Impulse Magnetoplasma Rocket, or VASIMR. The Discovery site explains that “Rather than heating chemicals and directing the resulting gases through high-temperature metal nozzles, VASIMR uses radio waves to create and speed up free-flying, electrically charged particles known as plasma. The concoction is then herded through nozzles made of magnetic fields, not metals like traditional rocket engines.

The sun and stars are made of plasma and physicists believe magnetic fields shape the tell-tale jets of gas generated by black holes.”
Apparently the engine is designed to work only in the vacuum of space; hence the developing company Ad Astra along with NASA’s support wants to launch this engine in 2011 or 2012. the reason behind the space testing is to see how the engine performs in the vacuum of space without spending extra money on developing and flying communications systems, power supplies and other services to support the tests.
Source