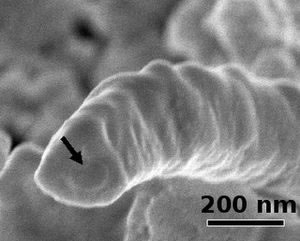 A new storage solution is being worked on by Pennsylvania researchers who have come up with a tri- nary storage solution as opposed to the usual binary. They have created a type of nanowire-based information storage device that is capable of storing three bit values rather than the usual two—that is, “0,” “1,” and “2” instead of just “0” and “1.” A non-binary nanowire-based type of memory would allow fewer nanowires to be used to achieve impressive storage capacity. This could allow electronic devices with memory—and that’s nearly all of them—to become more compact. Moreover, fewer nanowires to work with means that fabrication could be simpler. The phase changes are achieved by subjecting the nanowires to pulsed electric fields. This process heats the nanowires, altering the core and shell structure from crystalline (ordered) to amorphous (disordered). These two states correspond to two different electrical resistances: a low resistance for the case where both the core and shell are crystalline and a high resistance when they are both amorphous. In turn, these resistances represent two of the three bit values. The third value corresponds to the case where the core is amorphous while the shell is crystalline (or visa versa), resulting in an intermediate resistance.

Nanowires are excellent media for information storage, due to several factors. These include their often defect-free crystalline structures, which lead to superior behaviors that can be tuned by varying the nanowires’ dimensions, such as diameter, and other controllable properties. As the researcher develop this technology they plan to investigate how the nanowires’ size and chemical composition affects their electrical behavior, with the hope of finding new properties that could lead to electronic devices with novel features.
Source