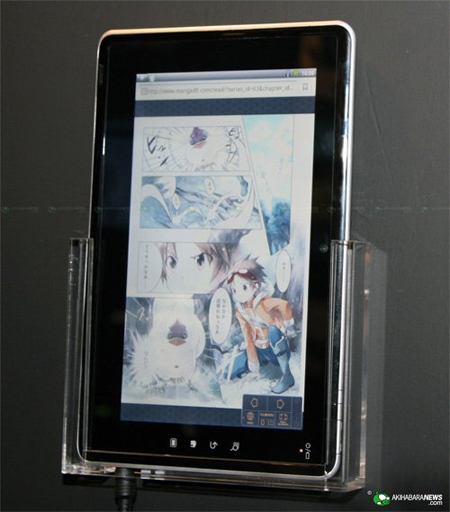 The whole tech world is being flooded with tablet technology and the very latest entrant into this market is Toshiba. At the recent CEATEC event held in Japan, they showed off their Android offering. Right now the device doesn’t seem to have a name of any kind, dubbed or otherwise so I’ll just refer to it as the Toshiba Tab, hope Samsung doesn’t mind. The device was actually used to show off the company’s Book-Place service that was announced for their Japanese sector. Though nothing is officially confirmed, rumor has it that it’ll be out (whenever that may be) on Android 2.2 aka Froyo and come equipped with a webcam. The display size was about 10-inchs with a 1024 × 600 putting in the iPad’s league except for the resolution. I’m sure we’ll hear more about this mysterious tablet before the month is out though.
Slipperybrick