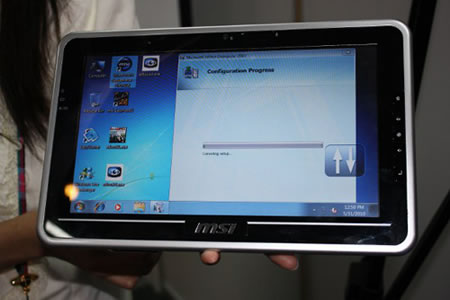 MSI gets official as it gets ready to unwrap its 10-inch Wintel-based tablet in January or February, ahead of the company’s Android-based models. Several other Oak Trail-based tablets are also said to be set for formal introduction at CES early in January. The tablet is powered by a 1.66GHz Intel Atom Z530 processor, 2GB of RAM, and packs a 32GB SSD that boots Windows 7 Home Premium, though MSI has created a Wind Touch UI layer. The Wintel-based tablet likely represents MSI’s WindPad 100, will be updated with a newer Oak Trail CPU, and is expected to feature a 10-inch, 1024×600 display, along with an accelerometer, SD slot, USB connectors, and mini HDMI output.

At the launch of its prototype in May, an MSI product manager on hand commented that the WindPad 100 will hit the market for around $499. However, with MSI’s aggressive pricing strategy, although the company has yet to disclose specific prices for its upcoming devices.
[Electronista]